Moving away from Mouse Bioassay (MBA). Time to implement the new legistation for lipophilic toxins will end on 31 December 2014 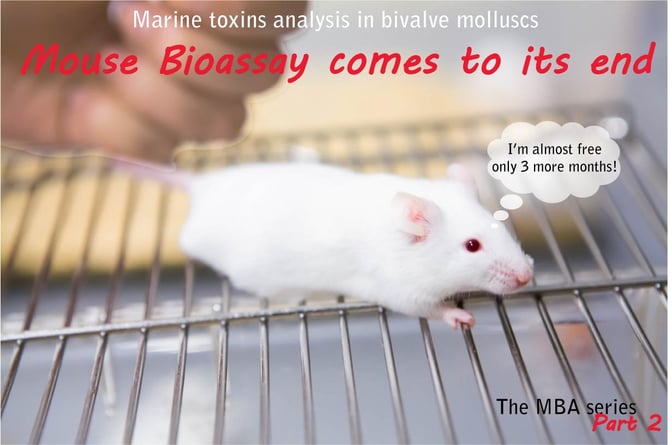 The liquid chromatography-tandem mass spectrometry (LC-MS/MS) is the reference method for lipophilic toxins since July 2011. According to the European Commission EU 15/2011 this method has to be used as matter of routine, both for the purposes of official controls, at any stage of the food chain, and own-checks by food business operators. This legislation applies to European countries and any other exporting to Europe.

For many years the MBA has been widely applied by experience laboratories or small producers. Minimum training on handling animals and laboratory skills were required to identify positive samples to diarrheic toxins. However, the implementation of a mass spectrometry LC/MS method is quite a challenging task that some may fail to achieve. Small to medium processors would have to subcontract analyses by this method and many private laboratories offering testing by MBA may have to stop this service due to the high investment and expertise required.

Official and private laboratories, producers and any other stakeholders were given up to the 31st of December 2014 to change methodologies. Reference laboratories from the main producer countries such as France, UK, Ireland, Spain or Italy accredited their LC-MS/MS methods well before the implementation date. However, other laboratories are still using the MBA until the last days.

At an early stage of the approved legislation some opinion leaders raised concerns about the capacity of the validated LC-MS/MS method to protect consumers (Otero et al, Analytical Chemistry 2011). The effect of uncontrolled factors in the method, together with the lack of information on toxicity made some to believe that the decision of this new method was made with haste. Although other experts disagreed with those conclusions, the controversy is still opened. A time extension to implement the new reference method was also requested by Spain to the EU commission. Thus, many laboratories in or outside the EU have still long to go, are undeceive or are even looking for other alternatives.

The phosphatase inhibition assay OkaTest is the only commercial kit that has been inter and intra-laboratory validated; as stated by the EU-RL, it fulfils the requirements of Regulation (EC) 2074/2005 and can be used for the detection of Okadaic Acid group toxins (OA, DTX1, DTX2, DTX3 including their esters).

OkaTest requires basic laboratory skills and minimum equipment. So, it can be easily implemented by shellfish processors or laboratories without high investment.

The presence of Okadaic Acid toxins determined by OkaTest in few hours could help make faster decisions as per not to harvest or to further product processing. Using the kit for own checks prior to harvest, when ropes or rafts are near to a closed area, or in areas with toxins levels below the legal limit, could save a lot of money. The use of this kit is especially interested in those areas where Okadaic Acid toxins blooms are common.

The combination of OkaTest and LC-MS/MS can be a good system to monitor lipophilic toxins in molluscs bivalves.

OkaTest and LC-MS/MS are both reliable analytical tools which advantages can be combined to bring important benefits to the users. LC-MS/MS is able to identify individual toxins from various groups of lipophilic toxins. However, it requires specialised personnel and large investment. OkaTest detects the potential sample toxicity, quantifying the Okadaic Acid toxins by PPIA, and does not need either specific equipment or qualified staff. Laboratories with large number of samples or limited access to LC-MS equipment could benefit from combining both methodologies. A shorter time-to-results and lower cost per sample can be achieved implementing the two methods together for routine monitoring of lipophilic toxins. LC-MS/MS requires 2 injections per sample. One of them is used to determine YTXs, AZAs, free OA and PTXs and a second injection to identify the Okadaic Acid derivatives. The second injection could be diverted to OkaTest, as this kit is able to determine total OA-toxins and can analyse more than 43 samples within the same day. However, it takes up to 20 hours to process 25 samples with LC-MS/MS. So, results could not be reported until the following day (Blanco et al, Revista Galega dos Recursos Mariños 2013).

The combination of both methodologies could also be used in events of OA-toxins blooms, previously identified by LC-MS/MS. The frequency and number of points of sampling increase under an event of toxic bloom; OkaTest can be used to analyse the extra number of samples and so to follow up the Okadaic Acid bloom. 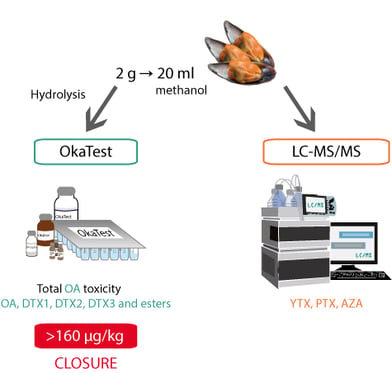