Time-out for the mouse bioassay 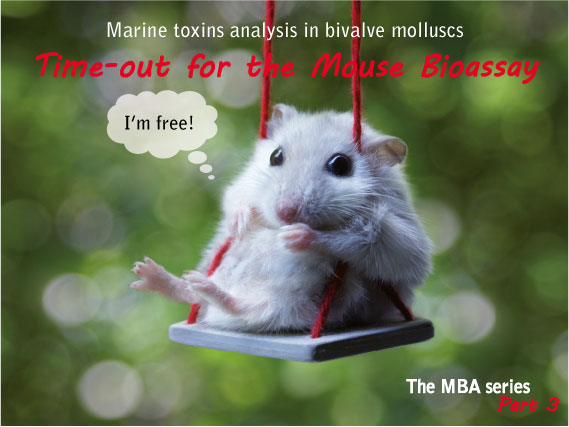 Since July 2011 the liquid chromatography-tandem mass spectrometry (LC-MS/MS) is the reference method for lipophilic toxins (Regulation (EU) No. 25/2011) Until then, the mouse bioassay was used as reference and it could have been applied for routine monitoring in official controls and own-checks until the 30th of December 2011. However, this biological assay is forbidden for routine monitoring of these toxins in Europe and in countries exporting products to the UE from the 1st of January 2015.

The Van den Top’s LC-MS/MS uses 100% of methanol as extraction solvent and alkaline conditions and has been inter and intra laboratory validated in 2009 and 2011, respectively.

The phosphatase inhibition assay, OkaTest, is the only commercial kit that has been inter and intra-laboratory validated for quantification of Okadaic Acid group toxins (OA, DTX1, DTX2, DTX3 including their esters) in molluscs bivalves. The assay is performed in a 96-wells microtiter plate and includes five ready-to-use standards. A total of 43 samples can be tested in about 2.5 hours.

The combination of OkaTest and LC-MS/MS can be a good system to monitor lipophilic toxins in molluscs, as described below. 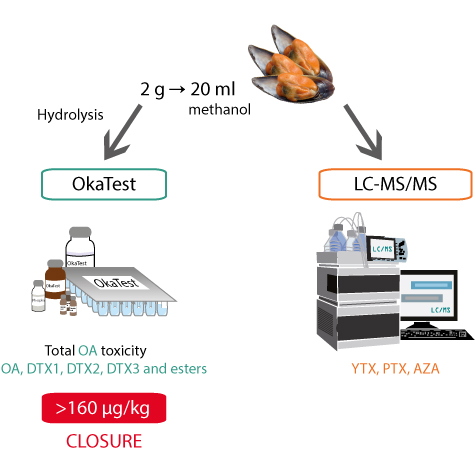